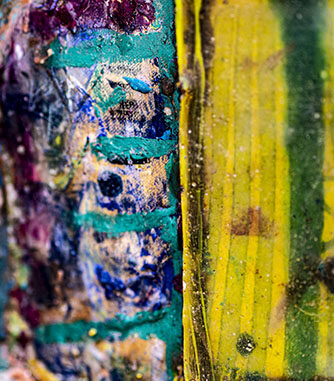 The notion of POP ART has a plethora of connotations. A multidisciplanary approach involves philosophical social realism along with psycho/cultural linguistics. The art work VOICES POP ART explores various modes of interpretation based on the semantics of choice.

Contents on side A of POP ART

A classic pop corn container, photographed and printed on fabric, forms the first layer that has been sewn on the fibre glass core. It is a quinasential pop art depiction due to its connotation with fun food, entertainment, and popular culture. The container itself exuberates the modernization of culture in a box. The voices being that of the classic cinema of popular culture. This kind of ‘voice power’ has a notion of soft power as it creates an identifiable culture projected globally. There appears a machine like system underneath with a driver. This symbolic sense of modernization in a machine age that produces consumables such as pop corn.

Baldessari used photo prints and text to highlight complex relations that were taking place in the 1960’s America cultural scape. The conceptual practice for this artwork is further explored in Object Photography A retrospective informs a progression of though from the early 1990’s.

Contents on side B of POP ART.

A base tonal background with painterly strokes covered with a thick layering of resin which is subsequently painted over and then partly scratched off. The area was then built up with a wax boundary and more resin poured within the basin. Process-intentional-expressionism forms the basis for this side with an emphasis on the obsessive painterly approach. This side in a sense is an antithesis POP ART. Its measure of value is through modes of obsessive production. The notion has no existential popular connotation given a non utilitarian function acts unlike the pop corn container that holds value.